In a Nutshell: SheEO is a global community of Activators that offers loans to individuals with innovative business ideas who would typically have to leverage their personal credit to succeed. The funds exclusively support Ventures that promote social and environmental sustainability, and SheEO built its ecosystem with an altruistic ask/give philosophy in mind. SheEO is a radically generous group of women or women-identifying, gender non-conforming, and Indigenous investors dedicated to making the world a better place.

The gender gap is evident in venture capital (VC) funding for startups. In 2019, women-founded and mixed-gender teams received only 11.5% of available VC investments, and all-women teams raised just 2.8% of VC funding. And that was the demographic’s best year ever.

That’s why Toronto-based SheEO offers a funding alternative to women, nonbinary, black, Indigenous, and women of color entrepreneurs worldwide. Based on lending, not investment, the SheEO model targets only business ideas that address social equity and sustainability problems.

As Founder Vicki Saunders puts it on the SheEO website, the VC discrepancy between men and women is “statistically impossible without massive bias designed into our systems and structures.”

And because entrepreneurship drives growth and progress, a good business idea wasted diminishes society’s ability to improve. That dampening effect is incredibly potent when entrepreneurs are forced to leverage, and often overextend, their personal credit to get their businesses off the ground. And many individuals lack the equity or credit score to qualify for a business loan.

Hannah Cree understands that predicament well. Cree began her relationship with SheEO in 2019 as a funding recipient, also known as a venture, before coming on board as SheEO’s Venture in Residence. In 2016, she started a business with a partner called CMNGD (Common Good) that aimed to employ people experiencing poverty as workers in a commercial laundry service.

The experiences she had building CMNGD put her on a path to SheEO.

“We couldn’t get a credit card for the business right off the bat. You’ve got to build that up over time,” Cree said. “And women often have to go after a lot of nontraditional ways of getting funding.”

Funding, Coaching, and Support for Growing a Business

Cree and her partner did manage to put away their own credit cards and successfully raise capital for CMNGD. But the process highlighted some of the challenges women and other borrowers routinely face with VC firms who aren’t used to seeing them in the room.

“Between me and my co-founder, I’m the better person at pitching and storytelling — and he would agree,” Cree said. “When he pitched our idea, they’d say, ‘It’s great, how are you going to execute?’ But when I pitched, I’d be asked to prove my numbers.”

Cree’s experiences as a SheEO venture couldn’t have been more different. Ventures don’t apply for capital investment but instead for five-year, 0% loans offered by what SheEO calls Activators. These Activators support women-led businesses with their money, business savvy, networks, and buying power. Activators agree to contribute the equivalent of $92 each per month to a perpetual fund that is loaned out at zero percent interest to support five women-owned businesses chosen by the cohort.

Since SheEO’s start, more than 5,000 Activators have contributed more than $5 million to 68-plus Ventures. The repayment rate is 95%, and women, nonbinary individuals, Indigenous people, and women of color in more than 73 countries have requested SheEO support.

“Every time a venture pays the money back, it goes back into the fund and supports more women,” Cree said. “Now that we’re at the five-year mark in Canada, we have a perpetual fund. Year-one Ventures are almost done paying back their loans, and all that money is being loaned out again.”

But it’s not just about money for the Ventures, Cree said. They receive coaching with world-class SheEO Development Guides and access to what has become a global community of Activators.

In return for their support, Activators with buying power, connections, and expertise become part of something bigger than what they may have created alone. SheEO offers a mutually supportive community for women and others, constructed on a philosophy of radical generosity.

“They are these go-getter types — they know how hard the struggle has been,” Cree said.

Initially, SheEO attracted Activators who were approaching the end of their careers and skewed toward work in finance. 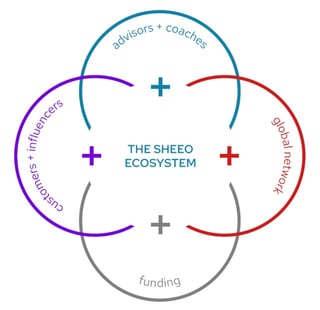 “Now we’re starting to see this shift because the community has grown so much that it’s not just about the Ventures anymore; it’s about the community,” Cree said.

And part of that is because SheEO has set up what it calls an ask/give ecosystem built on radical generosity. It expresses itself most exuberantly in frequent virtual open calls offered to a global audience.

“Every week we have calls in five countries where we’re resourcing each other, we’re doing asks and gives, we’re talking about how to have compassion,” Cree said. “We feature Ventures, but the Activators are also helping and resourcing each other. Now I see that the only difference between a venture and an Activator is that the venture receives the loan from SheEO. But the support and everything else in the ecosystem is available to everyone.”

Cree is now an Activator, too, in addition to her role as Venture in Residence, where she works at assuring that Ventures take full advantage of everything SheEO offers.

“I’m an Activator because this community is incredible,” she said.

Ventures must be majority-owned and led by women-identifying entrepreneurs and they must be addressing issues of social justice, equitability and sustainabilities in their models.

“The important piece with our model is that we’re not looking to fund just any idea; we’re working off the world’s to-do list,” Cree said.

That to-do list is a compendium of 17 sustainable development goals established by the United Nations. Venture applicants must make a convincing case that their concepts engage with one or more of those goals.

“For us at CMNGD, we were employing people who were facing homelessness and doing it through a commercial laundry service,” Cree said. “It depends on what you’re doing, but the ethical supply chain has become a really big part for everyone who’s doing a product-based model.”

“I am a single mom, I’m Indigenous, I have no business background and no assets,” Mousseau said on the site. “I started my company in my crockpot in my kitchen. Do you think any big bank would have supported me? Not a chance. SheEO has had my back; they saw the value in me and my business.”

And the company helps keep personal debt off the minds of entrepreneurs who are already focused on so much.

“A lot of times, women have to take on personal debt or use credit cards. And that’s if you can even qualify,” Cree said. “And now Patrice is in 800 stores, and it’s because she got a loan from SheEO.”

Editorial Note: Opinions expressed here are the author's alone, not those of any bank, credit card issuer, airline or hotel chain, and have not been reviewed, approved or otherwise endorsed by any of these entities. How they did it? From kitchen to global skincare success! Check out Satya founder & CEO Patrice Mousseau on Alberta Primetime talking about the 15% pledge and the call f...
Read More Mothers know best but will the rest?